Wilhelm Bleyle was an advertising genius, more exactly: a marketing genius. Without knowing the word, never mind, having heard one day somewhat of "Reason why" or "Consumer `s benefit", he already controlled before the turn of the century the whole professional instruments of the modern marketing. Wilhelm Bleyle imagined himself in his customers or customers and created products and service which were adapted to the life reality of the people. The buyers felt understood from Bleyle. Besides, he was in many things a pioneer!

W. Bleyle was the first one which introduced a system of standard dimensions - to the use of trade and of course also to the own in the branch. Since on the one hand the genormte dimensions system accelerated and made easier the sales process in the store, on the other hand, it served substantially to rationalise the production further and to diminish thus the enterpriser's risk further and the sailor suit was valid because of his agreed basic form anyway already as ideal for the manufactured manufacturing). The success of the Bleyle advertisement before first World War was less on the basis of the marketing of a national consciousness, rather by recognising other social developments, how the hygiene discussion and the popularity of the sport in this period.
Bleyle had an exactly defined group of buyers: a moneyed, middle-class family whose mothers were persuaded by the practical and many-sided application. This allowed an actual, exactly co-ordinated advertisement and to straighten a conformist design to the taste of the target group. Moreover, this century stood under the name of the child, children received a new value in the society, there came the boy's suit and his advertisement just in time.

Bleyle was the first one which pursued a professional advertisement in the branch: With posters and advertisements, prospectuses and catalogues, picture signs and slogans ("Bleyle `see boy's suits are the best"). Even in the early years the competition liked to use the image of Bleyle, so from 1901 almost all signs were legally protected. The company Bleyle knew very well in his advertising the right motives to use. There were little different pictures, rather very long-lasting and very modern motive, were selected. The everyday life was already taken up before 1914 in the advertisement. Often the advertising figures stretch a hand upwards, probably to emphasize a good fit. It is interesting that, e.g., in the advertising pictures ships of the navy never seemed, as well as almost no naval motives, however, rather toys were illustrated. 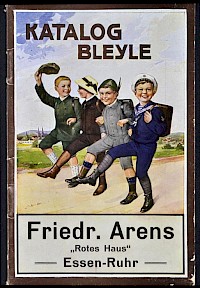 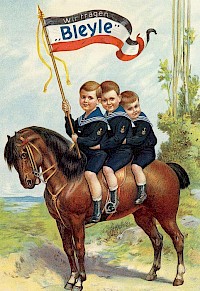 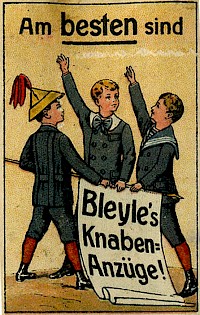 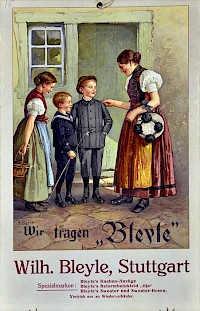 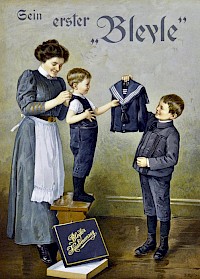 The Bleyle advertising - similar to later the classic "Beetle" advertising - the same five product advantages, namely a consistent price performance ratio, good customer service, prompt delivery, punctual execution and best quality as a basic theme with variations in The minds of the consumers pounded. Already as early as 1913, 4933 business addresses belonged to Bleyle's customer base. Important for Bleyle was already at that time a prerogative of politics; Everywhere the same, good goods should be bought for the same price. The company knew its buyer story very precisely and knew its clientele targeted with advertising to win.

Wilhelm Bleyle was also the first to have a professional sales promotion in the industry. With giveaways (such as postcards and timetables, calendars and hangers) for the audience, but above all with an elaborate advertising service for the retail trade. The advertising was fully focused on the middle bourgeoisie. The retailers were able to order the advertising material for a certain cost sharing in Stuttgart. Over-regional ads were advertised, Bleyle provided templates to retailers for local advertising. The services provided by the dealer ranged from sample advertisements (with free Matern service) to the consultation "for the textual drafting of Bleyle advertisements" to sample texts for the "impressions in the editorial part of the daily newspapers". Important media at this time were the newspapers and magazines, outdoor advertising, shop windows and retail stores. There were certain fixed advertising guidelines for each medium. 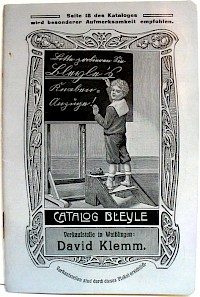 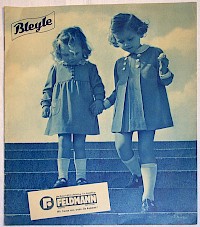 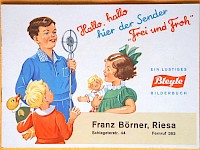 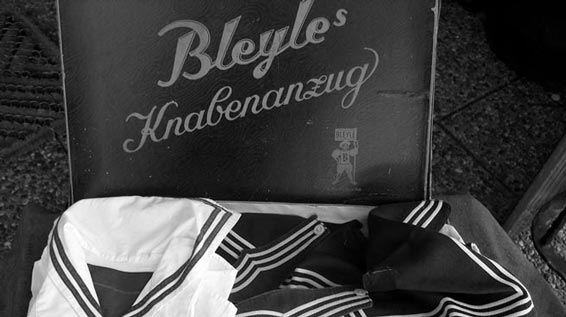 From children's clothing to fashion for all ages

Development of the Bleyle products